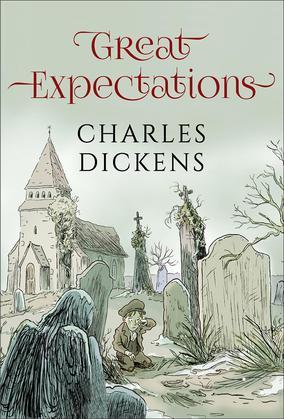 Written in the last decade of Dickens' life, 'Great Expectations' was praised widely and universally admired. It was his last great novel, and many critics believe it to be his finest. Readers and critics alike praised it for its masterful plot, which rises above the melodrama of some of his earlier works, and for its three-dimensional, psychologically realistic characters—characters much deeper and more interesting than the one-note caricatures of earlier novels.

It depicts the growth and personal development of an orphan named Pip. The novel was first published in serial form in Dickens's weekly periodical 'All the Year Round', from 1 December 1860 to August 1861. It is set among the marshes of Kent and in London in the early to mid-1800s. The Great Expectations contains some of Dickens most memorable scenes, including its opening, in a graveyard, when the young orphan Pip is accosted by the escaped convict, Abel Magwitch. It is full of extreme imagery, poverty, prison ships, barriers and chains, and fights to the death. Upon its release, Thomas Carlyle spoke of "All that Pip's nonsense". Later, George Bernard Shaw praised the novel as "All of one piece and consistently truthfull". Dickens felt Great Expectations was his best work, calling it "a very fine idea".

Throughout the narrative, typical Dickensian themes emerge: wealth and poverty, love and rejection, and the eventual triumph of good over evil. This book has become very popular and is now taught as a classic in many English classes. It has been translated into many languages and adapted many times in film and other media.

Charles Dickens (7 February 1812 – 9 June 1870) was an English writer and social critic. He created some of the world's best-known fictional characters and is regarded as the greatest novelist of the Victorian era. His works enjoyed unprecedented popularity during his lifetime, and by the twentieth century critics and scholars had recognised him as a literary genius. His novels and short stories enjoy lasting popularity.

The second of eight children, he grew up in a family frequently beset by financial insecurity. At age eleven, Dickens was taken out of school and sent to work in London backing warehouse, where his job was to paste labels on bottles for six shillings a week. His father John Dickens, was a warmhearted but improvident man. When he was condemned the Marshela Prison for unpaid debts, he unwisely agreed that Charles should stay in lodgings and continue working while the rest of the family joined him in jail. This three-month separation caused Charles much pain; his experiences as a child alone in a huge city – cold, isolated with barely enough to eat – haunted him for the rest of his life.