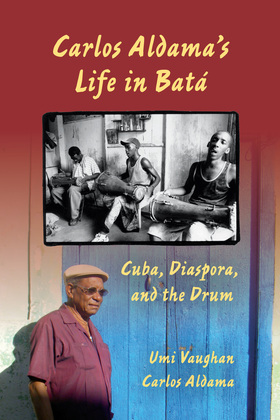 Carlos Aldama's Life in Batá: Cuba, Diaspora, and the Drum

Batá identifies both the two-headed, hourglass-shaped drum of the Yoruba people and the culture and style of drumming, singing, and dancing associated with it. This book recounts the life story of Carlos Aldama, one of the masters of the batá drum, and through that story traces the history of batá culture as it traveled from Africa to Cuba and then to the United States. For the enslaved Yoruba, batá rhythms helped sustain the religious and cultural practices of a people that had been torn from its roots. Aldama, as guardian of Afro-Cuban music and as a Santería priest, maintains the link with this tradition forged through his mentor Jesus Pérez (Oba Ilu), who was himself the connection to the preserved oral heritage of the older generation. By sharing his stories, Aldama and his student Umi Vaughan bring to light the techniques and principles of batá in all its aspects and document the tensions of maintaining a tradition between generations and worlds, old and new. The book includes rare photographs and access to downloadable audio tracks.