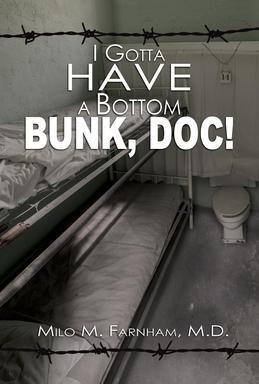 I Gotta Have A Bottom Bunk, Doc!

Dr. Milo Farnham attended Graceland College in Lamoni, Iowa, in Pre-Medicine, from 1949 to 1951. He then attended The University of Kansas, in Lawrence, Kansas, where he graduated with a Bachelor of Science in Education in 1953.  He married, and continued taking graduate classes in Spanish at K.U. for a semester.  He enlisted in the U.S. Air Force in February, 1954, went to Officer Candidate School at Lackland AFB, and after Intelligence School, served as a Squadron Intelligence Officer at Elmendorf AFB in Anchorage, Alaska, until January, 1958.

While in the USAF, he was accepted in Medical School at the State University of Iowa at Iowa City, Iowa, and completed second semester Pre-Medicine classes in Physics, Zoology, and Organic Chemistry in the spring of 1958 at SUI, and took Vertebrate Embryology in the summer, and started Medical School in the fall, graduating with an M.D. in 1962.  He had been inducted into the Alpha Omega Alpha Medical Honorary Scholarship Society.  He did a Rotating Internship at Kansas City General Hospital in Kansas City, Missouri, for a year, and then took a Residency in Internal Medicine at University Hospitals in Iowa City from 1963-1966.  He practiced in his specialty for the next 30 years in Independence, Missouri, retiring in September, 1996, on a Friday.

He immediately began working as the Medical Director of the Boonville Correctional Center (a penitentiary primarily for young Offenders) in Boonville, MO, the following Monday, staying there the following six years.  While there, he wrote some 500 stories of Offenders visits to him as their physician.  He was asked to transfer as the Medical Director at the Western Missouri Correctional  Center in Cameron, MO, where he was also in charge of another physician and a Nurse Practitioner.  WMCC is a "medical camp" to where long-term adult prisoners with significant medical problems were often transferred.  He continued there for another 10 1/2 years, retiring finally at age 80 on January 1, 2013.

During his fifty years as a physician, and before, he has been active as a lay minister in the Reorganized Church of Jesus Christ of Latter Day Saints, headquartered in Independence, Missouri, and served as Pastor of the Iowa City Congregation during his residency, and in various capacities in Independence, Missouri, as well.  He sang in the Anchorage Community Chorus, and has sung in church choirs and has played the piano and organ for church services and activities.  He has been a pilot since 1955, in Ham Radio since 1976, has been active in a variety of positions in Boy Scouting (including obtaining physicians and nurses to volunteer at Scout Camp), and has been on several hospital staffs and has served on a number of hospital committees.  When federal health care was scarce, he organized church physicians to spend a week each at the Santee Sioux Reservation in Nebraska, for a year.  He has been a member of the health team of the church to Honduras after Hurricane Fifi, and several times since.  He has been an FAA Aviation Medical Examiner, examining pilots for their periodic physicals to fly, since 1980, and continues doing this service in his home office, assisted by his wife, who is an R.N., now also retired.