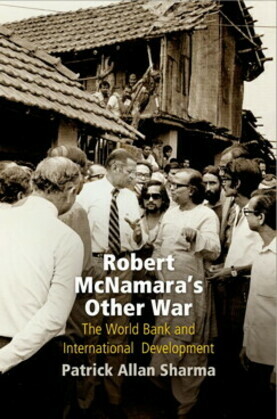 Robert McNamara is best known for his key role in the escalation of the Vietnam War as U.S. secretary of defense under Presidents John F. Kennedy and Lyndon Johnson. The familiar story begins with the brilliant young executive transforming Ford Motor Company, followed by his rise to political power under Kennedy, and culminating in his downfall after eight years of failed military policies. Many believe McNamara's fall from grace after Vietnam marked the end of his career. They were wrong.

In Robert McNamara's Other War, Patrick Allan Sharma reveals the previously untold story of what happened next. As president of the World Bank from 1968 to 1981, McNamara changed the way many people thought about international development by shifting the World Bank's focus to poverty alleviation. Though his efforts to redeem himself after his failures in Vietnam were well-intentioned, Sharma argues, his expansion of the World Bank's agenda contributed to a decline in the quality of its activities. McNamara's policies at the Bank also helped lay the groundwork for the economic crises that have plagued the developing world during the past three decades.

Not only has Sharma crafted an engaging chronicle of one of the most enigmatic figures in modern American history; he has also produced one of the first detailed histories of the World Bank. He mines previously unstudied Bank documents that have only recently become available to researchers as well as material from archives on three continents. Sharma's extensive research shows that McNamara's influence extended well beyond Vietnam and that his World Bank years may be his most enduring legacy.