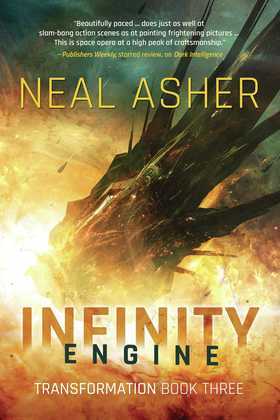 In the outskirts of space, and the far corners of the Polity, complex dealings are in play.

Several forces continue to pursue the deadly and enigmatic Penny Royal, none more dangerous than the Brockle, a psychopathic forensics AI and criminal who has escaped the Polity’s confinements and is upgrading itself in anticipation of a deadly showdown, becoming ever more powerful and intelligent.

Aboard Factory Station Room 101, the behemoth war factory that birthed Penny Royal, groups of humans, alien prador, and AI war drones grapple for control. The stability of the ship is complicated by the arrival of a gabbleduck known as the Weaver, the last living member of the ancient and powerful Atheter alien race.

What would an Atheter want with the complicated dealings of Penny Royal? Are the Polity and prador forces playing right into the dark AI’s hand, or is it the other way around? Set pieces align in the final book of Neal Asher’s action-packed Transformation trilogy, pointing to a showdown on the cusp of the Layden’s Sink black hole, inside of which lies a powerful secret, one that could destroy the entire Polity.