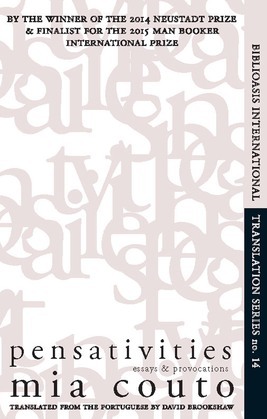 "One of the greatest living writers in the Portuguese language."—Philip Graham, The Millions

"At once deadpan and beguiling."—The Times Literary Supplement

"To understand what makes António 'Mia' Emílio Leite Couto special—even extraordinary—we have to loosen our grip on the binary that distinguishes between 'the West' and 'Africa.' Couto is 'white' without not being African, and as an 'African' writer he's one of the most important figures in a global Lusophone literature that stretches across three continents."—The New Inquiry

What would Barack Obama's 2004 campaign have looked like if it unfolded in an African nation? What does it mean to be an African writer today? How do writers and poets from all continents teach us to cross the sertão, the savannah, the barren places where we're forced to walk within ourselves? Bringing together the best pieces from his previously untranslated nonfiction collections, alongside new material presented here for the first time in any language, Pensativities offers English readers a taste of Mia Couto as essayist, lecturer, and journalist—with essays on cosmopolitanism, poverty, culture gaps, conservation, and more.

Mia Couto, an environmental biologist from Mozambique, is the author of twenty five books of fiction, nonfiction, and poetry. His work has been translated into twenty languages worldwide. In 2007 he was the first African author to win the Latin Union Award for Romance Languages, in 2013 he was awarded the €100,000 Camões Prize for Literature, and in 2014 he received World Literature Today's $50,000 Neustadt Prize for Literature.