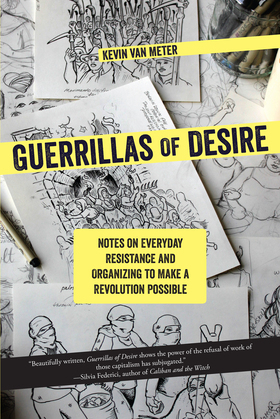 "Few have approached radical theory with the rigor and skill of Kevin Van Meter. Empowering, lucid, and inspiring, Guerrillas of Desire provides an exhaustive (and much needed) retooling of anarchism that will align the dreams of 'becoming revolutionaries' with the reality of everyday resistance." —Alexander Reid Ross, author of Against the Fascist Creep

"Looking for the political in the everyday and bringing anarchism into a productive dialogue with Autonomist Marxism, Kevin Van Meter challenges many of the left's usual assumptions and forces a reconsideration of what we mean by 'struggle.'" —Kristian Williams, author of Our Enemies in Blue

Behind the smiling faces of cashiers, wait staff, and workers of all sorts, a war is being planned, usually without the knowledge of official political and labor organizations. Guerrillas of Desire begins with a provocation: The Left is wrong. It's historical and current strategies are too-often based on the assumption that working and poor people are unorganized, acquiescent to systems of domination, or simply uninterested in building a new world. The fact is, as C.L.R. James has noted, they "are rebelling every day in ways of their own invention": pilfering, sabotaging, faking illnesses, squatting, fleeing, and counter-strategizing. Kevin Van Meter maps these undercurrents, illustrating that everyday resistance is an important factor in revolution and something radicals of all stripes must understand.

Kevin Van Meter is an activist-scholar based in the Pacific Northwest. He is coeditor of Uses of a Whirlwind: Movement, Movements, and Contemporary Radical Currents in the United States.