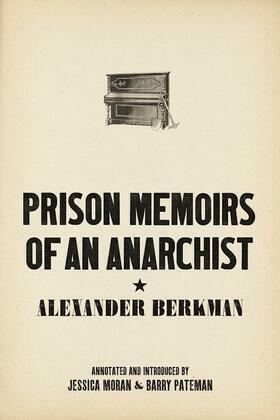 Prison Memoirs of an Anarchist

"A book of rare power and beauty, majestic in its structure, filled with the truth of imagination and the truth of actuality, emphatic in its declarations and noble in its reach."—Bayard Boyesen, Mother Earth.

"No other book discusses so frankly the criminal ways of the closed prison society."— Kenneth Rexroth

In 1892, Alexander Berkman tried to assassinate Henry Clay Frick for the latter's role in violently suppressing the Homestead Steel Strike. Berkman's attempt was unsuccessful. Berkman spent the next fourteen years in Pennsylvania's Western Penitentiary. Upon release, he wrote what was to become a classic of prison literature, and a profound testament to human courage in the face of oppression.

This new edition of his account of those years is introduced and fully annotated by Barry Pateman and Jessica Moran, both former associate editors of the Emma Goldman Papers at the University of California Berkeley. Their efforts make this the definitive version of Berkman's tale of his transformation within prison, his growing sympathy for those he'd considered social parasites, and the intimate relationships he developed with them. Also includes never-before-published facsimile reprints and transcriptions of the diary Berkman kept while he wrote this book, conveying the difficulties he had reliving his experiences.

Alexander Berkman (1870–1936) was a leading writer and militant in the anarchist movement and author of the classic primer What is Anarchism?

Barry Pateman was associate editor of Emma Goldman: A Documentary History, and editor of Chomsky on Anarchism. He is a historian and member of the Kate Sharpley Library collective.

Jessica Moran, was an assistant editor of Emma Goldman: A Documentary History. She is a member of the Kate Sharpley Library collective and is an archivist currently living and working in New Zealand.