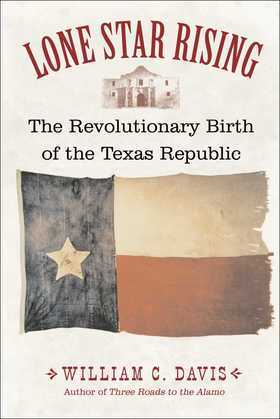 All Americans, not just Texans, remember the Alamo. But the siege and brief battle at that abandoned church in February and March 1836 were just one chapter in a much larger story -- larger even than the seven months of armed struggle that surrounded it. Indeed, three separate revolutionary traditions stretching back nearly a century came together in Texas in the 1830s in one of the great struggles of American history and the last great revolution of the hemisphere. Anglos steeped in 1776 fervor and the American revolution came seeking land, Hispanic and native Americans joined the explosion of republican uprisings in Mexico and Latin America, and the native tejanos seized on a chance for independence. As William C. Davis brilliantly depicts in Lone Star Rising, the result was an epic clash filled not just with heroism but also with ignominy, greed, and petty and grand politics.
In Lone Star Rising, Davis deftly combines the latest scholarship on the military battles of the revolution, including research in seldom used Mexican archives, with an absorbing examination of the politics on all sides. His stirring narrative features a rich cast of characters that includes such familiar names as Stephen Austin, Sam Houston, and Antonio Santa Anna, along with tejano leader Juan Seguín and behind-the-scenes players like Andrew Jackson. From the earliest adventures of freebooters, who stirred up trouble for Spain, Mexico, and the United States, to the crucial showdown at the San Jacinto River between Houston and Santa Anna there were massacres, misunderstandings, miscalculations, and many heroic men.
The rules of war are rarely stable and they were in danger of complete disintegration at times in Texas. The Mexican army often massacred its Anglo prisoners, and the Anglos retaliated when they had the chance after the battle of San Jacinto. The rules of politics, however, proved remarkably stable: The American soldiers were democrats who had a hard time sustaining campaigns if they didn't agree to them, and their leaders were as given to maneuvering and infighting as they were to the larger struggle. Yet in the end Lone Star Rising is not a myth-destroying history as much as an enlarging one, the full story behind the slogans of the Alamo and of Texas lore, a human drama in which the forces of independence, republicanism, and economics were made manifest in an unforgettable group of men and women.