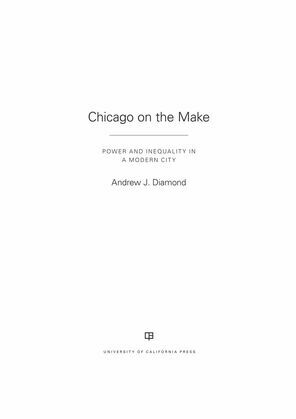 Chicago on the Make

Touted as America’s most quintessential modern city, Chicago has attracted the gaze of journalists, novelists, essayists, and scholars as much as any city in the nation. And yet surprisingly few historians have attempted big picture narratives of the city’s transformation over the long twentieth century. Chicago on the Make traces the evolution of the city’s politics, culture, and economy as Chicago grew from an unruly tangle of railyards, slaughterhouses, factories, tenement houses, and fiercely defended ethnic neighborhoods into one of the world’s mightiest global cities. Revising classic interpretations focused on the autocratic machine rule that shaped the city’s political institutions and public life, Andrew J. Diamond demonstrates how the politics of race at the grassroots crippled progressive forces and enabled an alliance of downtown business interests to promote a neoliberal agenda that created the stark inequalities that ravage the city today. Breaking new ground by extending the city’s history into the late 1990s and twenty-first century, when the Chicago model moved to the national stage during the Obama years, Chicago on the Make sheds new light on issues that continue to bedevil cities everywhere.