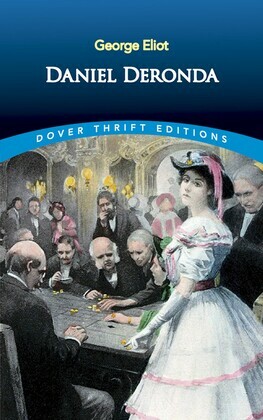 by George Eliot (Author)
Fiction Classics 19th century
EPUB
unlimited loans, One at a time
Details
A revealing portrait of the hypocrisy and superficiality of high society, George Eliot's final novel also offers a rare contemporary view of Jewish life in Victorian Britain. Daniel Deronda traces the intertwined lives of two markedly different characters: spirited, selfish Gwendolen Harleth, who maintains her social position and secures her family's future by entering a loveless and increasingly destructive marriage; and compassionate Daniel, whose rescue of a stranger leads to his immersion into the Jewish community and Zionist politics. Traumatized by the past and alienated by the present, Gwendolen and Daniel seek values that will add meaning to their lives.
Eliot's theme, the position of Jews in British and European society, was an extremely unusual one for the era. Her keen analysis of the problem of prejudice makes this novel especially relevant to modern readers, as does her depiction of clashing personal and political issues during a time of social and economic turbulence.