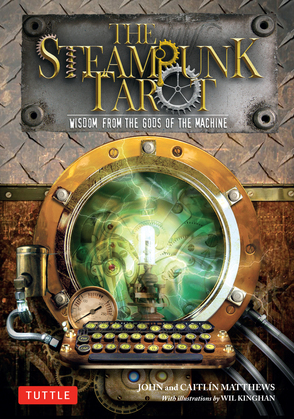 Imagine a time when vast helium-fueled airships took the place of aircraft, and where the hunger for adventure and exploration took the human race into stranger places than we ever imagined. The Steampunk Tarot imagines this in an alternate-reality tarot where The Technomage is king and the Punk Diva is queen.

Tumble down the rabbit hole into a construction of technology, machines, retro-art and culture, full of fantastic visions in a time and place that realizes an alternate world to our own. The world of steampunk combines Victoriana, the Gothic, and early invention with a huge dash of imagination and a tremendous sense of style. The Steampunk Tarot is a world apart: a nexus of opulence, innovation and alternate world-views that is reflected in 78 scenes. The 22 major arcana cards are the actors at the heart of the machine, the deos macninae or "the gods of the machine."

Acting as mediators of the Gods of the Machine are the 16 court cards who are the Legates of the Omniverse, or ambassadorial representatives of the Four Leagues, comprising all the skills that maintain the Imperium: they are the movers and shakers—the Commander, Lady, Navigator, and Messenger, or King, Queen, Knight and Page. They oversee the other 40 cards of the minor arcana, who are the elemental worlds of Airships, Engines, Submersibles and Gears, or Swords, Wands, Cups and Coins.

There are still things to discover and uncover in the Steampunk Imperium. Many new methods of spreading and playing with tarot cards are included, as well as methods of life-navigation by the use of skillful questions. The Steampunk Tarot is an adventurous tarot for the discerning diviner, to be appreciated both by tarot-users and steampunk fans the world over..

Tarot Cards are not included in the Ebook Edition.