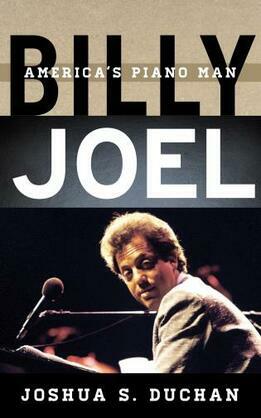 Despite his tremendous success, Billy Joel’s gifts as a composer and commentator on American life are long overdue for a thorough investigation. In Billy Joel: America’s Piano Man, music historian Joshua S. Duchan looks at the career and music of this remarkable singer-songwriter, exploring the unique ways Joel channels and transforms the cultural life of a changing America over four decades into bestselling song after song and album after album.

Billy Joel has not always enjoyed the acclaim of music critics, who have characterized his music as inauthentic and lacking a uniqueness of style. Duchan corrects this misunderstanding by exploring the depth and degree to which Joel’s songs engage with social, cultural, political, and economic issues. Organized by major themes and including original interviews with Joel himself, Duchan’s book delves into Joel’s endeavors as a musician, lyricist, and commentator on questions of geography and regionalism, politics, working- and middle-class culture, human relationships, and the history of music itself. Duchan draws on key songs from Joel’s career to explore each theme, from his folk-like lament for Long Island’s changing industry and lifestyle in “The Downeaster ‘Alexa’” to his emotional ode to Vietnam veterans in “Goodnight Saigon.”

Original interviews with Billy Joel blend with Duchan’s engaging analysis to provide readers of all backgrounds and ages a new look at these unforgettable songs. Music lovers and historians of both the academic and armchair variety will find this exploration of Joel’s work a rewarding adventure into America’s social, cultural, political, economic, and—above all—musical history.