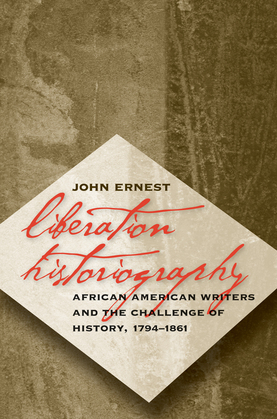 As the story of the United States was recorded in pages written by white historians, early-nineteenth-century African American writers faced the task of piecing together a counterhistory: an approach to history that would present both the necessity of and the means for the liberation of the oppressed. In Liberation Historiography, John Ernest demonstrates that African Americans created a body of writing in which the spiritual, the historical, and the political are inextricably connected. Their literature serves not only as historical recovery but also as historical intervention.

Ernest studies various cultural forms including orations, books, pamphlets, autobiographical narratives, and black press articles. He shows how writers such as Martin R. Delany, David Walker, Frederick Douglass, William Wells Brown, and Harriet Jacobs crafted their texts in order to resituate their readers in a newly envisioned community of faith and moral duty. Antebellum African American historical representation, Ernest concludes, was both a reading of source material on black lives and an unreading of white nationalist history through an act of moral imagination.