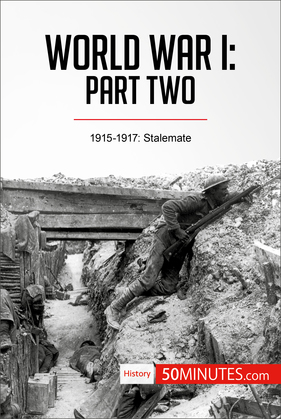 Keen to learn but short on time? Get to grips with the events of World War I from 1915 to 1917 in next to no time with this concise guide.

50Minutes provides a clear and engaging analysis of World War I from 1915 to 1917. The First World War was at the time the deadliest conflict in history, and involved all the world's most powerful countries. Despite hopes on both sides of a quick victory, the conflict soon descended into a war of attrition, with heavy losses but little decisive progress. The years 1915-1917 saw a continued stalemate and an expansion of the war as new countries, including the USA, entered the conflict.

In just 50 minutes you will:
oLearn why the conflict spread to cover a greater area and what motivated new countries to join the fighting
oEvaluate the military strategy of the Allies and the Central Powers at this stage in the war
oUnderstand why Russia signed a separate peace with Germany and why the USA decided to enter the war in 1917

ABOUT 50MINUTES | History & Culture
50MINUTES will enable you to quickly understand the main events, people, conflicts and discoveries from world history that have shaped the world we live in today. Our publications present the key information on a wide variety of topics in a quick and accessible way that is guaranteed to save you time on your journey of discovery.