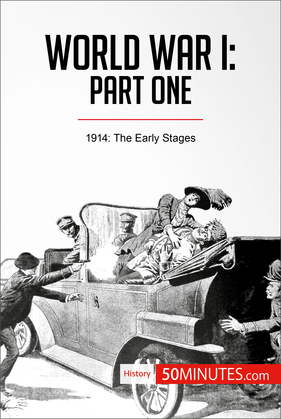 World War I: Part One

Keen to learn but short on time? Get to grips with the events of the beginning of World War I in next to no time with this concise guide.

50Minutes.com provides a clear and engaging analysis of the outbreak and early stages of World War I. In the summer of 1914, Europe's main powers embarked on a bloody war which would last for four years and claim millions of lives. Tensions had been running high for some time previously, and a complex combination of alliances and territorial aspirations caused fighting to spread across the continent. The First World War was at the time the largest conflict in history, and its repercussions were felt long after it ended.

In just 50 minutes you will:
oLearn about the political situation in Europe in the early 20th century and the long-term causes of the First World War
oUnderstand the series of events that preceded the war and how they contributed to the outbreak of hostilities
oAnalyse the major shortcomings of the military strategies of the countries at war