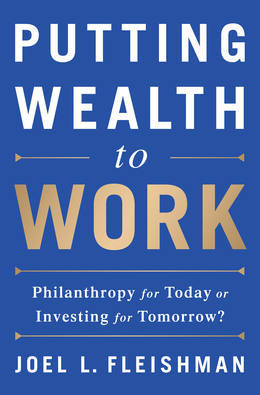 by Joel L. Fleishman (Author)
During the next twenty years, as part of the largest transfer of wealth in history, more than $500 billion is expected to pour into the philanthropic sector. Some of it will come from retiring baby boomers, but even more will come from newly rich Silicon Valley billionaires. Since 2006, the appeal of "giving while living" has grown, so much so that many philanthropic donors now expect not just to give money during their lifetimes, but to create organizations or ventures-some for profit, others not for profit-whose missions are expected to be completed within the lifetime of the donors. The combination of these two trends has transformed the not-for-profit sector in scale and dynamism, attracting some skeptical scrutiny along the way. Philanthrocapitalism has acquired some of the trappings of financialization, and has the potential to deliver ever greater impact. But will it? And will the demand that the impact be quickly realized mean that longer-term institution-building missions will be neglected?

Joel L. Fleishman is one of the wisest of wise men in philanthropy whose advice is routinely sought by organizations and individuals across the country. In Putting Wealth to Work, he tells the story of a uniquely American financial sector, all but created by Andrew Carnegie's example, that since 1995 has become more dynamic with every passing year. Staggering personal fortunes are made and given away, from Bill Gates to Mark Zuckerberg, as in no previous era since the golden age of American capitalism. America currently leads the world in this trend-of the 138 signers of the giving-while-living pledge, 110 were American-but the world is following in its footsteps. This movement of socially motivated capital is unprecedented and its consequences are potentially transformative for the American economy and the world at large.