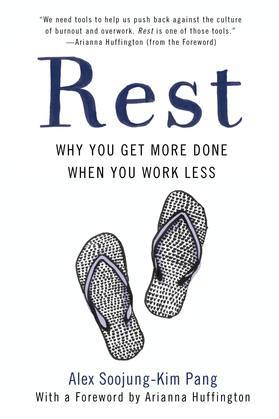 by Alex Soojung-Kim Pang (Author)
Nonfiction Health & fitness Health
One of Silicon Valley's sharpest strategists shows that success doesn't demand longer, harder hours, it demands that you work less
For most of us, overwork is the new normal and rest is an afterthought. In our busy lives, rest is defined as the absence of work: late-night TV binges, hours spent trawling the internet, something to do once we've finished everything else on our to-do lists. But dismissing rest stifles our ability to think creatively and truly recharge.

In Rest, Silicon Valley consultant Alex Pang argues that we can be more successful in all areas of our lives by recognizing the importance of rest: working better does not mean working more, it means working less and resting better. Treating rest as a passive activity secondary to work undermines our chances for a rewarding and meaningful life. Whether by making space for daily naps, as Winston Churchill did during World War II; going on hours-long strolls like Charles Darwin; or spending a week alone in a cabin like Bill Gates, pursuing what Pang calls "deliberate rest" is the true key to fulfillment and creative success. Drawing on rigorous scientific evidence and revelatory historical examples, Rest overturns everything our culture has taught us about work and shows that only by resting better can we start living better