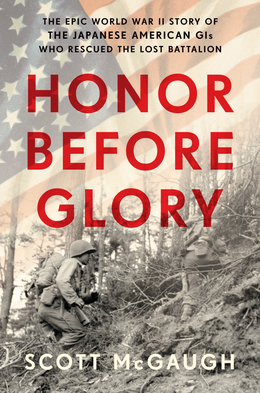 by Scott Mcgaugh (Author)
Nonfiction History History by country United States
On October 24, 1944, more than two hundred American soldiers realized they were surrounded by German infantry deep in the mountain forest of eastern France. As their dwindling food, ammunition, and medical supplies ran out, the American commanding officer turned to the 442nd Regimental Combat Team to achieve what other units had failed to do.

Honor Before Glory is the story of the 442nd, a segregated unit of Japanese American citizens, commanded by white officers, that finally rescued the "lost battalion." Their unmatched courage and sacrifice under fire became legend-all the more remarkable because many of the soldiers had volunteered from prison-like "internment" camps where sentries watched their mothers and fathers from the barbed-wire perimeter.

In seven campaigns, these young Japanese American men earned more than 9,000 Purple Hearts, 6,000 Bronze and Silver Stars, and nearly two dozen Medals of Honor. The 442nd became the most decorated unit of its size in World War II: its soldiers earned 18,100 awards and decorations, more than one for every man.

Honor Before Glory is their story-a story of a young generation's fight against both the enemy and American prejudice-a story of heroism, sacrifice, and the best America has to offer.