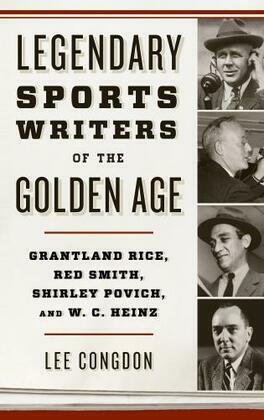 During the 1920s—the Golden Age of sports—sports writers gained their own recognition while covering such athletes as Babe Ruth, Bobby Jones, Jack Dempsey, and Red Grange. The top journalists of the era were the primary means by which fans learned about their favorite teams and athletes, and their popularity and importance in the sports world continued for decades.

Legendary Sports Writers of the Golden Age: Grantland Rice, Red Smith, Shirley Povich, and W. C. Heinz details the lives and careers of four sports-writing greats and the iconic athletes and events they covered. Although these writers established themselves during the 1920s, their careers extended well into the decades that followed. They reported on Jesse Owens, Joe Louis, Sandy Koufax, Arnold Palmer, and many other stars from the 1920s and beyond. Lee Congdon examines not only the lives and careers of Rice, Smith, Povich, and Heinz, but the distinctive writing style that each of them developed. Taken together, these four writers lifted sports reporting to heights that it is unlikely to reach again.

This book brings to life the greatest era in sports history, as seen through the eyes of four legendary sports writers. Sports fans, historians, and those interested in sports journalism will all find this a fascinating and informative look at a time when the sports world was at its peak.