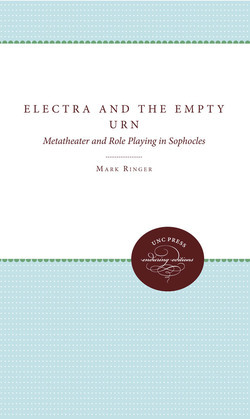 Electra and the Empty Urn

Metatheater, or "theater within theater," is a critical approach often used in studies of Shakespearian or modern drama. Breaking new ground in the study of ancient Greek tragedy, Mark Ringer applies the concept of metatheatricality to the work of Sophocles. His innovative analysis sheds light on Sophocles' technical ingenuity and reveals previously unrecognized facets of fifth-century performative irony.

Ringer analyzes the layers of theatrical self-awareness in all seven
Sophoclean tragedies, giving special attention to Electra, the
playwright's most metatheatrical work. He focuses on plays within plays,
characters who appear to be in rivalry with their playwright in "scripting"
their dramas, and the various roles that characters assume in their attempts to deceive other characters or even themselves. Ringer also examines instances of literal role playing, exploring the implications of the Greek convention of sharing multiple roles among only three actors.

Sophocles has long been praised as one of the masters of dramatic
irony. Awareness of Sophoclean metatheater, Ringer shows, deepens our appreciation of that irony and reveals the playwright's keen awareness of his art.