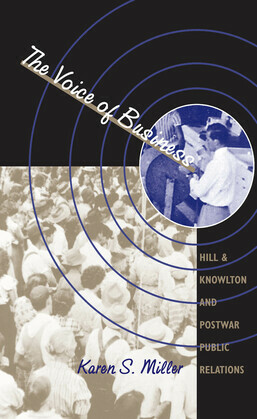 The Voice of Business

In 1933, John W. Hill opened the New York office of what would
become the most important public relations agency in history:
Hill & Knowlton, Inc. By 1959, the combined sales of its
clients--which included Procter & Gamble, Texaco, Gillette, and
Avco Manufacturing as well as the steel, tobacco, and aviation
industries' trade associations--amounted to 10 percent of the
gross national product. The Voice of Business chronicles Hill
& Knowlton's influence on American public discourse in the
years following World War II.
Guided by its founder's conservative ideals, Hill &
Knowlton developed a twofold mission: to influence public
discussion about issues important to its clients and to educate
Americans about big business. Karen Miller shows how the agency
tried to manipulate public opinion, political debate, and news
media content about such issues as postwar military aircraft
procurement, the deregulation of margarine production, President
Truman's seizure of steel mills in 1952, and the cigarette health
scare of 1953-54. Though its campaigns did not change many
opinions, she says, Hill & Knowlton affected the public
indirectly by reinforcing the ideas of its clients and other
conservatives.