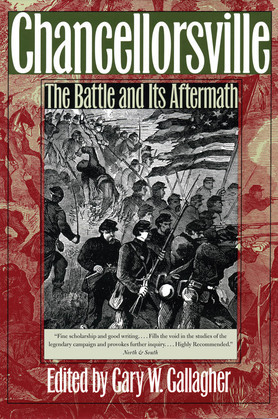 A variety of important but lesser-known dimensions of the Chancellorsville campaign of spring 1863 are explored in this collection of eight original essays. Departing from the traditional focus on generalship and tactics, the contributors address the campaign's broad context and implications and revisit specific battlefield episodes that have in the past been poorly understood.

Chancellorsville was a remarkable victory for Robert E. Lee's troops, a fact that had enormous psychological importance for both sides, which had met recently at Fredericksburg and would meet again at Gettysburg in just two months. But the achievement, while stunning, came at an enormous cost: more than 13,000 Confederates became casualties, including Stonewall Jackson, who was wounded by friendly fire and died several days later.

The topics covered in this volume include the influence of politics on the Union army, the importance of courage among officers, the impact of the war on children, and the state of battlefield medical care. Other essays illuminate the important but overlooked role of Confederate commander Jubal Early, reassess the professionalism of the Union cavalry, investigate the incident of friendly fire that took Stonewall Jackson's life, and analyze the military and political background of Confederate colonel Emory Best's court-martial on charges of abandoning his men.