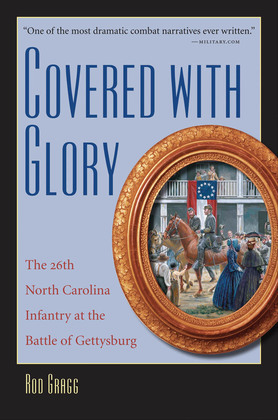 The battle of Gettysburg was the largest engagement of the Civil War, and--with more than 51,000 casualties--also the deadliest. The highest regimental casualty rate at Gettysburg, an estimated 85 percent, was incurred by the 26th North Carolina Infantry. Who were these North Carolinians? Why were they at Gettysburg? How did they come to suffer such a grievous distinction? In Covered with Glory, award-winning historian Rod Gragg reveals the extraordinary story of the 26th North Carolina in fascinating detail.

Praised for its "exhaustive scholarship" and its "highly readable style," Covered with Glory chronicles the 26th's remarkable odyssey from muster near Raleigh to surrender at Appomattox. The central focus of the book, however, is the regiment's critical, tragic role at Gettysburg, where its standoff with the heralded 24th Michigan Infantry on the first day of fighting became one of the battle's most unforgettable stories. Two days later, the 26th's bloodied remnant assaulted the Federal line at Cemetery Ridge and gained additional fame for advancing "farthest to the front" in the Pickett-Pettigrew Charge.