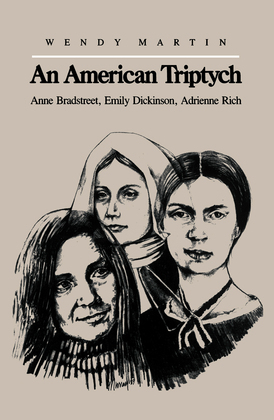 Anne Bradstreet, Emily Dickinson, and Adrienne Rich share nationality, gender, and an aesthetic tradition, but each expresses these experiences in the context of her own historical moment. Puritanism imposed stringent demands on Bradstreet, romanticism both inspired and restricted Dickinson, and feminism challenged as well as liberated Rich. Nevertheless, each poet succeeded in forming a personal vision that counters traditional male poetics. Their poetry celebrates daily life, demonstrates their commitment to nurturance rather than dominance, shows their resistance to the control of both their earthly and heavenly fathers, and affirms their experience in a world that has often denied women a voice.

Wendy Martin recreates the textures of these women's lives, showing how they parallel the shifts in the status of American women from private companion to participant in a wider public life. The three portraits examine in detail the life and work of the Puritan wife of a colonial magistrate, the white-robed, reclusive New England seer, and the modern feminist and lesbian activist. Their poetry, Martin argues, tells us much about the evolution of feminist and patriarchal perspectives, from Bradstreet's resigned acceptance of traditional religion, to Dickinson's private rebellion, to Rich's public criticism of traditional masculine culture. Together, these portraits compose the panels of an American triptych.

Beyond the dramatic contrasts between the Puritan and feminist vision, Martin finds striking parallels in form. An ideal of a new world, whether it be the city on the hill or a supportive community of women, inspires both. Like the commonwealth of saints, this concept of a female collectivity, which all three poets embrace, is a profoundly political phenomenon based on a pattern of protest and reform that is deeply rooted in American life. Martin suggests that, through their belief in regeneration and renewal, Bradstreet Dickinson, and Rich are part of a larger political as well as literary tradition. An American Triptych both enhances our understanding of the poets' work as part of the web of American experience and suggests the outlines of an American female poetic.