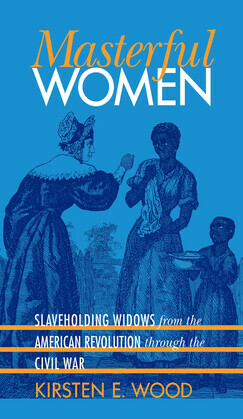 Many early-nineteenth-century slaveholders considered themselves "masters" not only over slaves, but also over the institutions of marriage and family. According to many historians, the privilege of mastery was reserved for white males. But as many as one in ten slaveholders--sometimes more--was a widow, and as Kirsten E. Wood demonstrates, slaveholding widows between the American Revolution and the Civil War developed their own version of mastery.

Because their husbands' wills and dower law often gave women authority over entire households, widowhood expanded both their domestic mandate and their public profile. They wielded direct power not only over slaves and children but also over white men--particularly sons, overseers, and debtors. After the Revolution, southern white men frequently regarded powerful widows as direct threats to their manhood and thus to the social order. By the antebellum decades, however, these women found support among male slaveholders who resisted the popular claim that all white men were by nature equal, regardless of wealth. Slaveholding widows enjoyed material, legal, and cultural resources to which most other southerners could only aspire. The ways in which they did--and did not--translate those resources into social, political, and economic power shed new light on the evolution of slaveholding society.