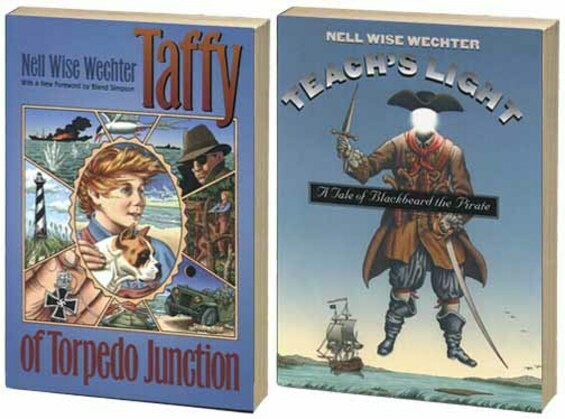 Available for the first time as an Omnibus Ebook, this collection brings together two of Nell Wise Wechter's beloved stories of young people on the North Carolina Coast. These wonderful stories will entertain and enlighten readers of all ages.

Included in this Omnibus Ebook:

A longtime favorite of several generations of Tar Heels, Taffy of Torpedo Junction is the thrilling adventure story of thirteen-year-old Taffy Willis, who, with the help of her pony and dog, exposes a ring of Nazi spies operating from a secluded house on Hatteras Island, North Carolina, during World War II. For readers of all ages, the book brings to life the dramatic wartime events on the Outer Banks, where German U-boats turned an area around Cape Hatteras into 'Torpedo Junction' by sinking more than sixty American vessels in just a six-month period in 1942. Taffy has been enjoyed by young and old alike since it was first published in 1957.

The legend of Teach's Light has been handed down by the people of Stumpy Point village in coastal North Carolina for nearly three centuries. None can say when the mysterious light that hovers above Little Dismal Swamp will next appear, but it is said to guard a store of treasure buried long ago by Edward Teach (c. 1680–1718), better known as the infamous pirate Blackbeard. One summer evening, teenagers Corky Calhoun and Toby Davis row into the swamp, drawn by the mystery of Teach's Light. But their adventure soon takes a curious turn. Thrown back in time by a sudden explosion, Corky and Toby find themselves floating safely above seventeenth-century England, as Blackbeard's life unfolds below. They watch as the orphaned Edward Teach decides to stow away across the Atlantic, begins his career as the fearsome Blackbeard, stages terrible raids from the Caribbean to North Carolina aboard his ship, the Queen Anne's Revenge, and, finally, is beheaded in a battle with the British Crown's ships. An inventive blend of history and science fiction, Teach's Light brings Blackbeard's story vividly to life.