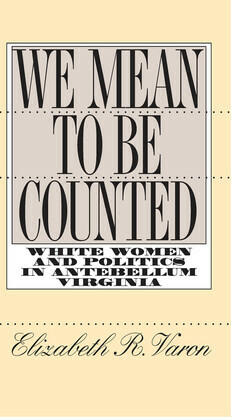 We Mean to Be Counted

Over the past two decades, historians have successfully disputed
the notion that American women remained wholly outside the realm of politics until the early twentieth century. Still, a consensus has prevailed that, unlike their Northern counterparts, women of the antebellum South were largely excluded from public life. With this book, Elizabeth Varon effectively challenges such historical assumptions. Using a wide array of sources, she demonstrates that throughout the antebellum period, white Southern women of the slaveholding class were important actors in the public drama of politics.

Through their voluntary associations, legislative petitions,
presence at political meetings and rallies, and published
appeals, Virginia's elite white women lent their support to such
controversial reform enterprises as the temperance movement and the American Colonization Society, to the electoral campaigns of the Whig and Democratic Parties, to the literary defense of
slavery, and to the causes of Unionism and secession. Against the backdrop of increasing sectional tension, Varon argues, these
women struggled to fulfill a paradoxical mandate: to act both as
partisans who boldly expressed their political views and as
mediators who infused public life with the "feminine" virtues of
compassion and harmony.