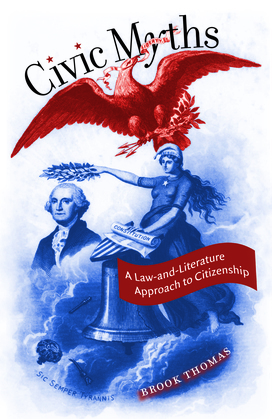 As questions of citizenship generate new debates for this generation of Americans, Brook Thomas argues for revitalizing the role of literature in civic education. Thomas defines civic myths as compelling stories about national origin, membership, and values that are generated by conflicts within the concept of citizenship itself. Selected works of literature, he claims, work on these myths by challenging their terms at the same time that they work with them by relying on the power of narrative to produce compelling new stories.

Civic Myths consists of four case studies: Nathaniel Hawthorne's The Scarlet Letter and "the good citizen"; Edward Everett Hale's "The Man without a Country" and "the patriotic citizen"; Mark Twain's Adventures of Huckleberry Finn and "the independent citizen"; and Maxine Hong Kingston's China Men and "the immigrant citizen." Thomas also provides analysis of the civic mythology surrounding Abraham Lincoln and the case of Ex parte Milligan. Engaging current debates about civil society, civil liberties, civil rights, and immigration, Thomas draws on the complexities of law and literature to probe the complexities of U.S. citizenship.