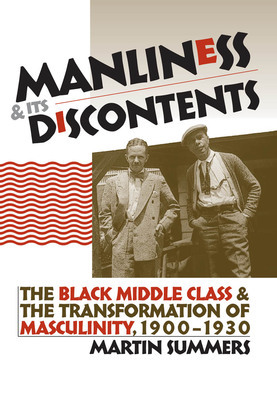 Manliness and Its Discontents

In a pathbreaking new assessment of the shaping of black male identity in the early twentieth century, Martin Summers explores how middle-class African American and African Caribbean immigrant men constructed a gendered sense of self through organizational life, work, leisure, and cultural production. Examining both the public and private aspects of gender formation, Summers challenges the current trajectory of masculinity studies by treating black men as historical agents in their own identity formation, rather than as screens on which white men projected their own racial and gender anxieties and desires.
Manliness and Its Discontents focuses on four distinct yet overlapping social milieus: the fraternal order of Prince Hall Freemasonry; the black nationalist Universal Negro Improvement Association, or the Garvey movement; the modernist circles of the Harlem Renaissance; and the campuses of historically black Howard and Fisk Universities. Between 1900 and 1930, Summers argues, dominant notions of what it meant to be a man within the black middle class changed from a Victorian ideal of manliness--characterized by the importance of producer values, respectability, and patriarchy--to a modern ethos of masculinity, which was shaped more by consumption, physicality, and sexuality. Summers evaluates the relationships between black men and black women as well as relationships among black men themselves, broadening our understanding of the way that gender works along with class, sexuality, and age to shape identities and produce relationships of power.