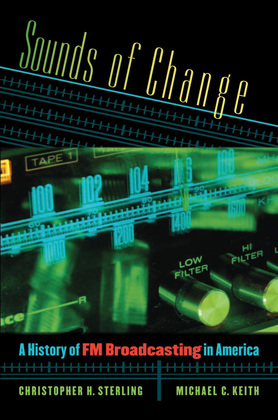 When it first appeared in the 1930s, FM radio was a technological marvel, providing better sound and nearly eliminating the static that plagued AM stations. It took another forty years, however, for FM's popularity to surpass that of AM. In Sounds of Change, Christopher Sterling and Michael Keith detail the history of FM, from its inception to its dominance (for now, at least) of the airwaves.

Initially, FM's identity as a separate service was stifled, since most FM outlets were AM-owned and simply simulcast AM programming and advertising. A wartime hiatus followed by the rise of television precipitated the failure of hundreds of FM stations. As Sterling and Keith explain, the 1960s brought FCC regulations allowing stereo transmission and requiring FM programs to differ from those broadcast on co-owned AM stations. Forced nonduplication led some FM stations to branch out into experimental programming, which attracted the counterculture movement, minority groups, and noncommercial public and college radio. By 1979, mainstream commercial FM was finally reaching larger audiences than AM. The story of FM since 1980, the authors say, is the story of radio, especially in its many musical formats. But trouble looms. Sterling and Keith conclude by looking ahead to the age of digital radio--which includes satellite and internet stations as well as terrestrial stations--suggesting that FM's decline will be partly a result of self-inflicted wounds--bland programming, excessive advertising, and little variety.