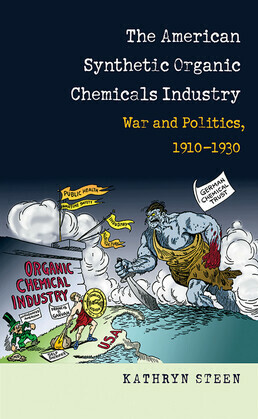 Prior to 1914, Germany dominated the worldwide production of synthetic organic dyes and pharmaceuticals like aspirin. When World War I disrupted the supply of German chemicals to the United States, American entrepreneurs responded to the shortages and high prices by trying to manufacture chemicals domestically. Learning the complex science and industry, however, posed a serious challenge. This book explains how the United States built a synthetic organic chemicals industry in World War I and the 1920s. Kathryn Steen argues that Americans' intense anti-German sentiment in World War I helped to forge a concentrated effort among firms, the federal government, and universities to make the United States independent of "foreign chemicals."

Besides mobilization efforts to make high explosives and war gases, federal policies included protective tariffs, gathering and publishing market information, and, most dramatically, confiscation of German-owned chemical subsidiaries and patents. Meanwhile, firms and universities worked hard to develop scientific and manufacturing expertise. Against a backdrop of hostilities and intrigue, Steen shows how chemicals were deeply entwined with national and international politics and policy during the war and subsequent isolationism of the turbulent early twentieth century.