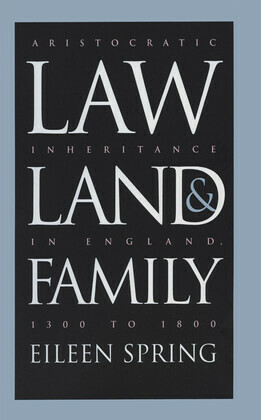 Eileen Spring presents a fresh interpretation of the history of inheritance among the English gentry and aristocracy. In a work that recasts both the history of real property law and the history of the family, she finds that one of the principal and determinative features of upper-class real property inheritance was the exclusion of females. This exclusion was accomplished by a series of legal devices designed to nullify the common-law rules of inheritance under which--had they prevailed--40 percent of English land would have been inherited or held by women. Current ideas of family development portray female inheritance as increasing in the seventeenth and eighteenth centuries, but Spring argues that this is a misperception, resulting from an incomplete consideration of the common-law rules. Female rights actually declined, reaching their nadir in the eighteenth century. Spring shows that there was a centuries-long conflict between male and female heirs, a conflict that has not been adequately recognized until now.