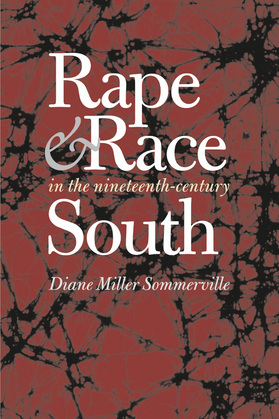 Rape and Race in the Nineteenth-Century South

Challenging notions of race and sexuality presumed to have originated and flourished in the slave South, Diane Miller Sommerville traces the evolution of white southerners' fears of black rape by examining actual cases of black-on-white rape throughout the nineteenth century.

Sommerville demonstrates that despite draconian statutes, accused black rapists frequently avoided execution or castration, largely due to intervention by members of the white community. This leniency belies claims that antebellum white southerners were overcome with anxiety about black rape. In fact, Sommerville argues, there was great fluidity across racial and sexual lines as well as a greater tolerance among whites for intimacy between black males and white females. According to Sommerville, pervasive misogyny fused with class prejudices to shape white responses to accusations of black rape even during the Civil War and Reconstruction periods, a testament to the staying power of ideas about poor women's innate depravity.

Based predominantly on court records and supporting legal documentation, Sommerville's examination forces a reassessment of long-held assumptions about the South and race relations as she remaps the social and racial terrain on which southerners--black and white, rich and poor--related to one another over the long nineteenth century.