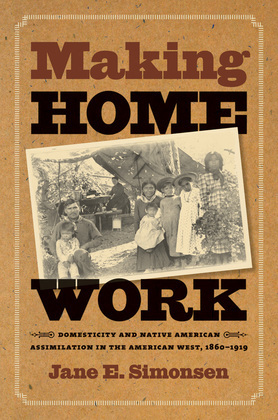 During the westward expansion of America, white middle-class ideals of home and domestic work were used to measure differences between white and Native American women. Yet the vision of America as "home" was more than a metaphor for women's stake in the process of conquest--it took deliberate work to create and uphold. Treating white and indigenous women's struggles as part of the same history, Jane E. Simonsen argues that as both cultural workers and domestic laborers insisted upon the value of their work to "civilization," they exposed the inequalities integral to both the nation and the household.

Simonsen illuminates discussions about the value of women's work through analysis of texts and images created by writers, women's rights activists, reformers, anthropologists, photographers, field matrons, and Native American women. She argues that women such as Caroline Soule, Alice Fletcher, E. Jane Gay, Anna Dawson Wilde, and Angel DeCora called upon the rhetoric of sentimental domesticity, ethnographic science, public display, and indigenous knowledge as they sought to make the gendered and racial order of the nation visible through homes and the work performed in them. Focusing on the range of materials through which domesticity was produced in the West, Simonsen integrates new voices into the study of domesticity's imperial manifestations.