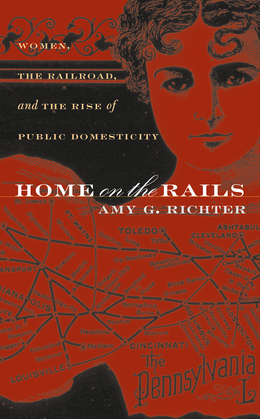 Home on the Rails

Recognizing the railroad's importance as both symbol and experience in Victorian America, Amy G. Richter follows women travelers onto trains and considers the consequences of their presence there.

For a time, Richter argues, nineteenth-century Americans imagined the public realm as a chaotic and dangerous place full of potential, where various groups came together, collided, and influenced one another, for better or worse. The example of the American railroad reveals how, by the beginning of the twentieth century, this image was replaced by one of a domesticated public realm--a public space in which both women and men increasingly strove to make themselves "at home."

Through efforts that ranged from the homey touches of railroad car decor to advertising images celebrating female travelers and legal cases sanctioning gender-segregated spaces, travelers and railroad companies transformed the railroad from a place of risk and almost unlimited social mixing into one in which white men and women alleviated the stress of unpleasant social contact. Making themselves "at home" aboard the trains, white men and women domesticated the railroad for themselves and paved the way for a racially segregated and class-stratified public space that freed women from the home yet still preserved the railroad as a masculine domain.