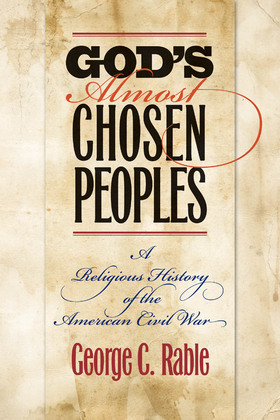 Throughout the Civil War, soldiers and civilians on both sides of the conflict saw the hand of God in the terrible events of the day, but the standard narratives of the period pay scant attention to religion. Now, in God's Almost Chosen Peoples, Lincoln Prize-winning historian George C. Rable offers a groundbreaking account of how Americans of all political and religious persuasions used faith to interpret the course of the war.

Examining a wide range of published and unpublished documents--including sermons, official statements from various churches, denominational papers and periodicals, and letters, diaries, and newspaper articles--Rable illuminates the broad role of religion during the Civil War, giving attention to often-neglected groups such as Mormons, Catholics, blacks, and people from the Trans-Mississippi region. The book underscores religion's presence in the everyday lives of Americans north and south struggling to understand the meaning of the conflict, from the tragedy of individual death to victory and defeat in battle and even the ultimate outcome of the war. Rable shows that themes of providence, sin, and judgment pervaded both public and private writings about the conflict. Perhaps most important, this volume--the only comprehensive religious history of the war--highlights the resilience of religious faith in the face of political and military storms the likes of which Americans had never before endured.