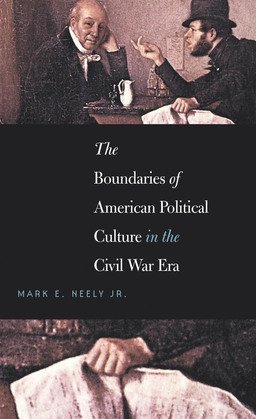 The Boundaries of American Political Culture in the Civil War Era

Did preoccupations with family and work crowd out interest in politics in the nineteenth century, as some have argued? Arguing that social historians have gone too far in concluding that Americans were not deeply engaged in public life and that political historians have gone too far in asserting that politics informed all of Americans' lives, Mark Neely seeks to gauge the importance of politics for ordinary people in the Civil War era.

Looking beyond the usual markers of political activity, Neely sifts through the political bric-a-brac of the era--lithographs and engravings of political heroes, campaign buttons, songsters filled with political lyrics, photo albums, newspapers, and political cartoons. In each of four chapters, he examines a different sphere--the home, the workplace, the gentlemen's Union League Club, and the minstrel stage--where political engagement was expressed in material culture. Neely acknowledges that there were boundaries to political life, however. But as his investigation shows, political expression permeated the public and private realms of Civil War America.