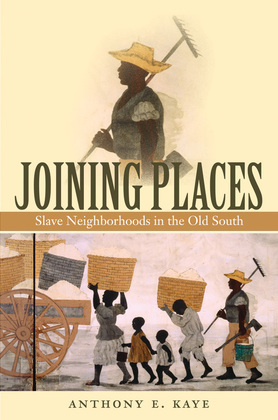 In this new interpretation of antebellum slavery, Anthony Kaye offers a vivid portrait of slaves transforming adjoining plantations into slave neighborhoods. He describes men and women opening paths from their owners' plantations to adjacent farms to go courting and take spouses, to work, to run away, and to otherwise contend with owners and their agents. In the course of cultivating family ties, forging alliances, working, socializing, and storytelling, slaves fashioned their neighborhoods into the locus of slave society.

Joining Places is the first book about slavery to use the pension files of former soldiers in the Union army, a vast source of rich testimony by ex-slaves. From these detailed accounts, Kaye tells the stories of men and women in love, "sweethearting," "taking up," "living together," and marrying across plantation lines; striving to get right with God; carving out neighborhoods as a terrain of struggle; and working to overthrow the slaveholders' regime. Kaye's depiction of slaves' sense of place in the Natchez District of Mississippi reveals a slave society that comprised not a single, monolithic community but an archipelago of many neighborhoods. Demonstrating that such neighborhoods prevailed across the South, he reformulates ideas about slave marriage, resistance, independent production, paternalism, autonomy, and the slave community that have defined decades of scholarship.