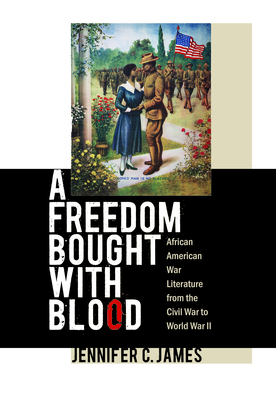 A Freedom Bought with Blood

In the first comprehensive study of African American war literature, Jennifer James analyzes fiction, poetry, autobiography, and histories about the major wars waged before the desegregation of the U.S. military in 1948. Examining literature about the Civil War, the Spanish-American Wars, World War I, and World War II, James introduces a range of rare and understudied texts by writers such as Victor Daly, F. Grant Gilmore, William Gardner Smith, and Susie King Taylor. She argues that works by these as well as canonical writers such as William Wells Brown, Paul Laurence Dunbar, and Gwendolyn Brooks mark a distinctive contribution to African American letters.

In establishing African American war literature as a long-standing literary genre in its own right, James also considers the ways in which this writing, centered as it is on moments of national crisis, complicated debates about black identity and African Americans' claims to citizenship. In a provocative assessment, James argues that the very ambivalence over the use of violence as a political instrument defines African American war writing and creates a compelling, contradictory body of literature that defies easy summary.