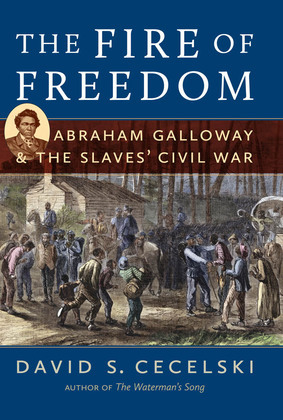 The Fire of Freedom

Abraham H. Galloway (1837-1870) was a fiery young slave rebel, radical abolitionist, and Union spy who rose out of bondage to become one of the most significant and stirring black leaders in the South during the Civil War. Throughout his brief, mercurial life, Galloway fought against slavery and injustice. He risked his life behind enemy lines, recruited black soldiers for the North, and fought racism in the Union army's ranks. He also stood at the forefront of an African American political movement that flourished in the Union-occupied parts of North Carolina, even leading a historic delegation of black southerners to the White House to meet with President Lincoln and to demand the full rights of citizenship. He later became one of the first black men elected to the North Carolina legislature.
Long hidden from history, Galloway's story reveals a war unfamiliar to most of us. As David Cecelski writes, "Galloway's Civil War was a slave insurgency, a war of liberation that was the culmination of generations of perseverance and faith." This riveting portrait illuminates Galloway's life and deepens our insight into the Civil War and Reconstruction as experienced by African Americans in the South.