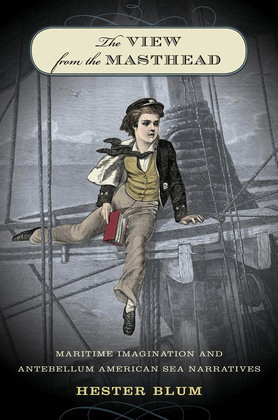 The View from the Masthead

With long, solitary periods at sea, far from literary and cultural centers, sailors comprise a remarkable population of readers and writers. Although their contributions have been little recognized in literary history, seamen were important figures in the nineteenth-century American literary sphere. In the first book to explore their unique contribution to literary culture, Hester Blum examines the first-person narratives of working sailors, from little-known sea tales to more famous works by Herman Melville, James Fenimore Cooper, Edgar Allan Poe, and Richard Henry Dana.

In their narratives, sailors wrote about how their working lives coexisted with--indeed, mutually drove--their imaginative lives. Even at leisure, they were always on the job site. Blum analyzes seamen's libraries, Barbary captivity narratives, naval memoirs, writings about the Galapagos Islands, Melville's sea vision, and the crisis of death and burial at sea. She argues that the extent of sailors' literacy and the range of their reading were unusual for a laboring class, belying the popular image of Jack Tar as merely a swaggering, profane, or marginal figure. As Blum demonstrates, seamen's narratives propose a method for aligning labor and contemplation that has broader applications for the study of American literature and history.