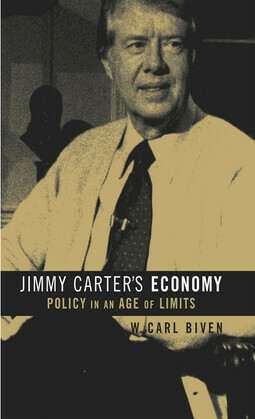 The massive inflation and oil crisis of the 1970s damaged Jimmy Carter's presidency. In Jimmy Carter's Economy, Carl Biven traces how the Carter administration developed and implemented economic policy amid multiple crises and explores how a combination of factors beyond the administration's control came to dictate a new paradigm of Democratic Party politics.

Jimmy Carter inherited a deeply troubled economy. Inflation had been on the rise since the Johnson years, and the oil crisis Carter faced was the second oil price shock of the decade. In addition, a decline in worker productivity and a rise in competition from Germany and Japan compounded the nation's economic problems. The resulting anti-inflation policy that was forced on Carter included controlling public spending, limiting the expansion of the welfare state, and postponing popular tax cuts. Moreover, according to Biven, Carter argued that the ambitious policies of the Great Society were no longer possible in an age of limits and that the Democratic Party must by economic necessity become more centrist.