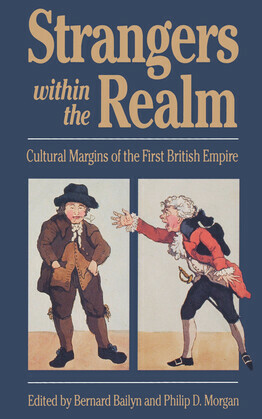 Strangers Within the Realm

Shedding new light on British expansion in the seventeenth and eighteenth centuries, this collection of essays examines how the first British Empire was received and shaped by its subject peoples in Scotland, Ireland, North America, and the Caribbean.

An introduction surveys British imperial historiography and provides a context for the volume as a whole. The essays focus on specific ethnic groups -- Native Americans, African-Americans, Scotch-Irish, and Dutch and Germans -- and their relations with the British, as well as on the effects of British expansion in particular regions -- Ireland, Scotland, Canada, and the West Indies. A conclusion assesses the impact of the North American colonies on British society and politics.

Taken together, these essays represent a new kind of imperial history -- one that portrays imperial expansion as a dynamic process in which the oulying areas, not only the English center, played an important role in the development and character of the Empire. The collection interpets imperial history broadly, examining it from the perspective of common folk as well as elites and discussing the clash of cultures in addition to political disputes. Finally, by examining shifting and multiple frontiers and by drawing parallels between outlying provinces, these essays move us closer to a truly integrated story that links the diverse ethnic experiences of the first British Empire.