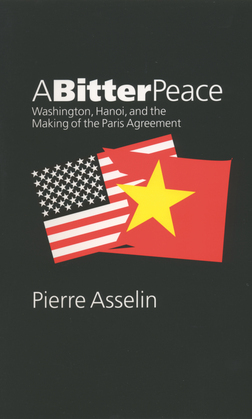 Demonstrating the centrality of diplomacy in the Vietnam War, Pierre Asselin traces the secret negotiations that led up to the Paris Agreement of 1973, which ended America's involvement but failed to bring peace in Vietnam. Because the two sides signed the agreement under duress, he argues, the peace it promised was doomed to unravel.

By January of 1973, the continuing military stalemate and mounting difficulties on the domestic front forced both Washington and Hanoi to conclude that signing a vague and largely unworkable peace agreement was the most expedient way to achieve their most pressing objectives. For Washington, those objectives included the release of American prisoners, military withdrawal without formal capitulation, and preservation of American credibility in the Cold War. Hanoi, on the other hand, sought to secure the removal of American forces, protect the socialist revolution in the North, and improve the prospects for reunification with the South. Using newly available archival sources from Vietnam, the United States, and Canada, Asselin reconstructs the secret negotiations, highlighting the creative roles of Hanoi, the National Liberation Front, and Saigon in constructing the final settlement.