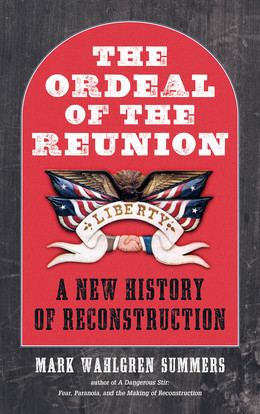 The Ordeal of the Reunion

For a generation, scholarship on the Reconstruction era has rightly focused on the struggles of the recently emancipated for a meaningful freedom and defined its success or failure largely in those terms. In The Ordeal of the Reunion, Mark Wahlgren Summers goes beyond this vitally important question, focusing on Reconstruction's need to form an enduring Union without sacrificing the framework of federalism and republican democracy. Assessing the era nationally, Summers emphasizes the variety of conservative strains that confined the scope of change, highlights the war's impact and its aftermath, and brings the West and foreign policy into an integrated narrative. In sum, this book offers a fresh explanation for Reconstruction's demise and a case for its essential successes as well as its great failures. Indeed, this book demonstrates the extent to which the victors' aims in 1865 were met--and at what cost.

Summers depicts not just a heroic, tragic moment with equal rights advanced and then betrayed but a time of achievement and consolidation, in which nationhood and emancipation were placed beyond repeal and the groundwork was laid for a stronger, if not better, America to come.