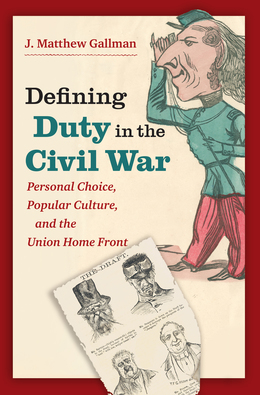 Defining Duty in the Civil War

The Civil War thrust Americans onto unfamiliar terrain, as two competing societies mobilized for four years of bloody conflict. Concerned Northerners turned to the print media for guidance on how to be good citizens in a war that hit close to home but was fought hundreds of miles away. They read novels, short stories, poems, songs, editorials, and newspaper stories. They laughed at cartoons and satirical essays. Their spirits were stirred in response to recruiting broadsides and patriotic envelopes. This massive cultural outpouring offered a path for ordinary Americans casting around for direction.

Examining the breadth of Northern popular culture, J. Matthew Gallman offers a dramatic reconsideration of how the Union's civilians understood the meaning of duty and citizenship in wartime. Although a huge percentage of military-aged men served in the Union army, a larger group chose to stay home, even while they supported the war. This pathbreaking study investigates how men and women, both white and black, understood their roles in the People's Conflict. Wartime culture created humorous and angry stereotypes ridiculing the nation's cowards, crooks, and fools, while wrestling with the challenges faced by ordinary Americans. Gallman shows how thousands of authors, artists, and readers together created a new set of rules for navigating life in a nation at war.