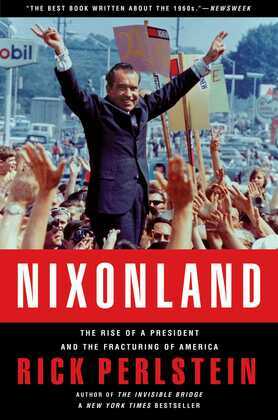 Nixonland: The Rise of a President and the Fracturing of America

Told with urgency and sharp political insight, Nixonland recaptures America's turbulent 1960s and early 1970s and reveals how Richard Nixon rose from the political grave to seize and hold the presidency.

Perlstein's epic account begins in the blood and fire of the 1965 Watts riots, nine months after Lyndon

in the United States. Yet the next year, scores of liberals were tossed out of Congress, America was more divided than ever, and a disgraced politician was on his way to a shocking comeback: Richard Nixon.

Between 1965 and 1972, America experienced no less than a second civil war. Out of its ashes, the political world we know now was born. It was the era not only of Nixon, Johnson, Spiro Agnew, Hubert H. Humphrey, George McGovern, Richard J. Daley, and George Wallace but Abbie Hoffman, Ronald Reagan, Angela Davis, Ted Kennedy, Charles Manson, John Lindsay, and Jane Fonda. There are tantalizing glimpses of Jimmy Carter, George H. W. Bush, Jesse Jackson, John Kerry, and even of two ambitious young men named Karl Rove and William Clinton -- and a not so ambitious young man named George W. Bush.

Cataclysms tell the story of Nixonland:

- The student insurgency over the Vietnam War, the assassinations of Robert F. Kennedy and Martin Luther King, and the riots at the 1968 Democratic National Convention

- Richard Nixon pledging a new dawn of national unity, governing more divisively than any president before him, then directing a criminal conspiracy, the Watergate cover-up, from the Oval Office

Then, in November 1972, Nixon, harvesting the bitterness and resentment born of America's turmoil, was reelected in a landslide even bigger than Johnson's 1964 victory, not only setting the stage for his dramatic 1974 resignation but defining the terms of the ideological divide that characterizes America today.

Filled with prodigious research and driven by a powerful narrative, Rick Perlstein's magisterial account of how America divided confirms his place as one of our country's most celebrated historians.