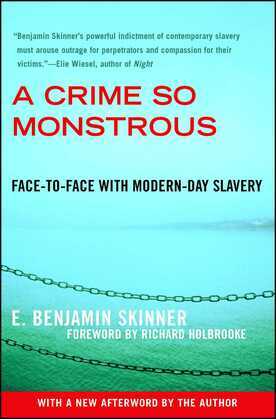 A Crime So Monstrous

by E. Benjamin Skinner (Author)
Excerpt
Nonfiction History >1989
warning_amber
One or more licenses for this book have been acquired by your organisation details
EPUB
Unlimited loans, 2 years, One at a time
Details

To be a moral witness is perhaps the highest calling of journalism, and in this unforgettable, highly readable account of contemporary slavery, author Benjamin Skinner travels around the globe to personally tell stories that need to be told -- and heard.

As Samantha Power and Philip Gourevitch did for genocide, Skinner has now done for modern-day slavery. With years of reporting in such places as Haiti, Sudan, India, Eastern Europe, The Netherlands, and, yes, even suburban America, he has produced a vivid testament and moving reportage on one of the great evils of our time.

There are more slaves in the world today than at any time in history. After spending four years visiting a dozen countries where slavery flourishes, Skinner tells the story, in gripping narrative style, of individuals who live in slavery, those who have escaped from bondage, those who own or traffic in slaves, and the mixed political motives of those who seek to combat the crime.

Skinner infiltrates trafficking networks and slave sales on five continents, exposing a modern flesh trade never before portrayed in such proximity. From mega-harems in Dubai to illicit brothels in Bucharest, from slave quarries in India to child markets in Haiti, he explores the underside of a world we scarcely recognize as our own and lays bare a parallel universe where human beings are bought, sold, used, and discarded. He travels from the White House to war zones and immerses us in the political and flesh-and-blood battles on the front lines of the unheralded new abolitionist movement.

At the heart of the story are the slaves themselves. Their stories are heartbreaking but, in the midst of tragedy, readers discover a quiet dignity that leads some slaves to resist and aspire to freedom. Despite being abandoned by the international community, despite suffering a crime so monstrous as to strip their awareness of their own humanity, somehow, some enslaved men regain their dignity, some enslaved women learn to trust men, and some enslaved children manage to be kids. Skinner bears witness for them, and for the millions who are held in the shadows.

In so doing, he has written one of the most morally courageous books of our time, one that will long linger in the conscience of all who encounter it, and one that -- just perhaps -- may move the world to constructive action.