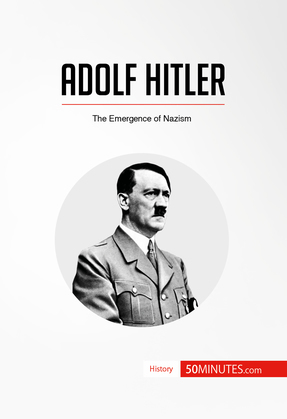 Keen to learn but short on time? Get to grips with the life of Adolf Hitler in next to no time with this concise guide.

50Minutes.com provides a clear and engaging analysis of Adolf Hitler. Adolf Hitler's name will never be forgotten and his atrocious acts are still remembered to this day. He led the most shocking crimes against humanity in modern history which saw millions of people, particularly Jews, killed. But when Hitler was a child, there was no indication that he would grow up to be this figure of hate. So how did this passionate artist become the man responsible for the 20th century's biggest genocide?

In just 50 minutes you will:
o Learn about Hitler's life from his average childhood in Austria to his suicide in Berlin
o Understand how he came to form the Nazi Party and terrorise Europe, invading countries and leaving a trail of destruction in his wake
o Analyse the developments that took place across the world as a result of Hitler's actions, such as the creation of the United Nations and the start of the Cold War


ABOUT 50MINUTES.COM | History & Culture
50MINUTES.COM will enable you to quickly understand the main events, people, conflicts and discoveries from world history that have shaped the world we live in today. Our publications present the key information on a wide variety of topics in a quick and accessible way that is guaranteed to save you time on your journey of discovery.